today was our last lesson. I hope you liked it :)

After correcting your essays / narratives, you watched an awesome video from Saturday Night Live entitled "Liquorville". We analysed the situation and where the humour came from.

You can watch it below:

Enjoy and look up for the words you don't know on the Internet... or not... :s

Class canceled because of meeting

your class was unfortunately cancelled because of my meeting that was delayed.

Please note that next Tuesday, Mr Lopez in Economy will have the entire group for 2 hours (from 11 a.m. to 1 p.m.) and that you won't have English therefore.

See you on Monday then for the last class of the year... scary, ain't it...? And good luck with your exams.

for today guys, you had to prepare an interview about the topic we are currently studying and this is what you did in groups first for 15 minutes and then one journalist in the class was designated and 4 interwees (one from each group).

You had to talk about your personal experience and debate about the issue; and the journalist(s) had to go deeper and dig for more information when your answers were too short.

You did a pretty good job and I thought it was really interesting even if some of the people in the audience couldn't keep their mouths shut and spoke French... Gosh! I wish you were mute sometimes... just kidding.

Correction of your reading test + Kids react to Obama's speech 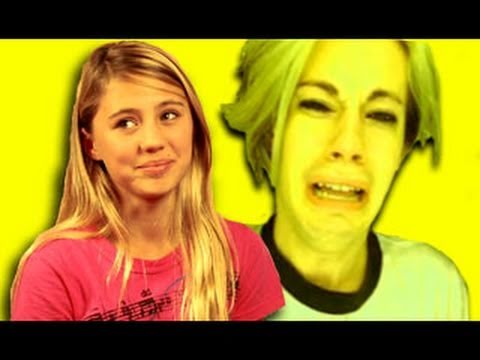 today we first corrected some parts of yesterday's reading test that most of you passed very well.

However, the part about Moira's arguments (the most difficult one actually...) was not that good even if you should have been able to do something interesting with what you knew... Here is what we said for the correction:

Then, we continued the class with a recap of last time's lesson about B. Obama announcing the death of Osama bin Laden. Here is what we said about the reactions you had to the video where the kids react to his speech:

I believe that the kids are cute but what they say (they are happy about someone's death) is in contrast with their cuteness. Normally, death is not a joyful moment.

I was shocked because of their reactions. There must have been a transfer of the psychological shock that their parents had when the attacks were carried out. They now have the same moral values as their parents.

Finally, you were able to watch the video a 2nd time and you had to identify all the questions that were asked to the children. Here is the list of questions:

HW: for next time, don't forget your homework assignment from yesterday and get ready to be interviewed as if you were the kids in the video (same questions but YOUR personal answers...).

Final Test about the Irish Conflict

today you took your final reading comprehension test about the sequence "The Irish Conflict".

I hope you will have understood the text alright and that you will acheive good grades.

Here is a copy of the exam (yet to be uploaded)

HW: don't forget you have to turn in the last writing test of the year by Friday (homework is on the test worksheet).

today we started the last sequence of the year about "Memories of 9/11" studying first what you as children remembered from the World Trade Center attack and then focusing on Obama's speech after the death of Osama Bin Laden.

In this document, Barack Obama announces the death of Osama bin Laden. He says his action as the Al-Quaeda leader was atrocious. He recalls the worst terrorist attack of the U.S.: 9-11 2001.
He draws a timeline / chronology of events :
1- The two hijacked planes which crashed into the world Trade Center/ Twin Towers.
2- The cloud of black smoke above the Pentagon.
3- The towers which collapsed to the ground.
4- The plane which crashed in Pennsylvania where "heroic passengers / pilots / citizens saved" a lot of people.
5- The thousands of people (children, women, and men) who were killed.

Finally, we had time to watch the other video, which is the reactions of some kids to Barack Obama's announcement. You can watch it below:

HW: for next time, you need to prepare reactions to this video, both about the content of the video and about what you felt when you saw it first.

today we first corrected the worksheet about your text entitled "Guns" as a recap. Here is the correction for the exercises:

Then we continued the class with the correction of last week's exam. I hope you will have understood more things now.

Here is some important vocabulary / phrases to remember:

HW: Don't forget to update your vocabulary worksheets correctly (for example, make one about "how to express anger") + get ready for your final test on Monday (reading comprehension).

today we finished studying the text about Kevin and Brian and we'll correct the recap worksheet tomorrow as well as the oral comprehension test that you took last week.

Here is what we said about the text (explanation of the quarrel and the arguments of the protagonist for or against the I.R.A.):

HW: finish the recap worksheet and get for your final test.

Guns - The behaviours of Brian and Kevin today as the computers in the class didn't work, we did a quick warm up about the picture illustrating our text. You were reminded of the date 1916, which is a very important date for the Irish people since it corresponds to "Easter Rising", a period when the Irish showed how independent they wanted to become.

Then we continued our analysis of the text entitled "Guns" and we particularly focused our attention on the attitudes of the two boys. Here is what we said:


The evolution of the characters attitudes / behaviours:

- Brian:
Brian is impulsive. He is proud of himself and exited to own a gun. He shows off.
When Kevin criticizes him, he gets angry very rapidly.
-> "in a sudden blaze of temper" / "ready to lunge again at him"

- Kevin:
He is quieter / calmer but he also gets angry with Brian. He tries to calm him down.
And he manages to calm him down.
-> "the fire was gone out of [Brian]" / "he slumped his shoulders" to accept his defeat.
Kevin refused to help Brian and he is fed up with his attitude. They may have the same ideas but they want to use different means.
=> Kevin is peaceful whereas Brian is violent.

today we first worked on a video document about how Google, the search engine, invades our privacy. You can watch the document again below:

The document is an awareness campaign. It intends to make people realize that Google is building an empire with our personal information.
The search engine tracks our data (données) for 18 months and keeps them to sell them to advertising companies.
It doesn't really weigh in the pros and cons of the company but tries to warn us.
There are indeed some privacy concerns (cf. google maps where you can see the inside of your home sometimes).

Google knows everything about you, and is used by nearly everyone, every where in the world.

Then we continued working on the new text entitled "Guns". Here is what we said about it:

The scene takes place in Belfast, the capital city of Northern Ireland (Ulster), more precisely in Brian's bedroom. Brian and Kevin are meeting in his bedroom because Brian wants to show him the rifle and ammunition he has.
The scene probably takes place in the late 1960's just before the period of "The Troubles".
The boys may have met when they were both rebels against the British government or Kevin is possibly Brian's sister's boyfriend. He cares for her and is happy that she is not dead. Indeed, a few weeks ago, she almost died in a bombing but she survived.

At first, Brian is showing the weapons he has in his hiding place (underneath the bed).

HW: learn your lesson and new vocabulary = be able to present the text.