Sequence Pack: Immigration to the US and Ellis Island

"The picture was taken in New York City because I can see New York's skyline in the background. It was taken before September 2001, since there are the twin towers of the World Trade Center.
On the boat, which is a ferry, there may be tourists taking pictures.
The photograph may have been taken from another boat or from Ellis Island. Ellis island used to be an immigration station for people who wanted to go to the US."

Trace écrite réellement produite:
The American dream represents a hope for a new better life
"The Chinese may have gone to the US in order to find gold. They may have wanted to make a fortune."

"People immigrated to the US because they were poor and destitute. They wanted to escape their miserable conditions. But now they often suffer from racism, problems of language, problems of drugs, unemployment, and still poverty."

Here is what we said about the document:

"From 1840 to 1860, the Irish immigrated to the US because of the potato famine in Ireland. There wasn't enough food for the population because there was a disease in the vegetable. The Irish used to eat lots of potatoes. It was an easy crop. They fled in order to find food again and so as to escape hunger and starvation. Most of the Western Europeans went to America because they poor and destitute. They didn't have a job. They were jobless/unemployed. They hoped to have a better life. They wanted to make money, at least get better wages and why not make a fortune?"
Both : sert à annoncer deux choses.

ex : Both war refugees and immigrants from the Third World now want to enter the US.

ex : Ellis Island used to be an immigration station where people had to pass a series of tests (cf. the literacy test). If they were unhealthy, they were not allowed to get in the USA.

ex : When they arrived in Ellis Island, immigrants were either allowed to stay or they were sent back to their countries of origin.

"The scene takes place in Russia in 1907. It depicts a "pogrom", the persecution of Jews at the beginning of the 20th century. Russian soldiers who were riding horses set the village on fire. Some people tried to flee the battle but they were shot dead. A man managed to escape but he was injured. He limped."

It's a symbol of liberty / freedom but also of stress. It was founded in the 1890's. Immigrants had to go through Ellis Island in order to enter the Us. They had to take two tests: a medical test and a literacy test. Either they passed the tests or they were sent back.


At the end of the lesson, I asked you to make hypotheses about what Jacob was thinking before he shot the Russian soldier dead. Here is what you said:

He hesitated. Maybe the soldier had family.
He wondered if he should shoot the soldier.
He thought about the consequences.
He recalled his father's memory.
He remembered what the soldiers did to his village.

"Nowadays, both war refugees and Third World immigrants go to the US.
Before, immigrants had to go through Ellis Island.
They had to take a physical/medical and literacy test.
Either they passed the test or they returned to their country.

= They were sent back to their country.
= They were forced to go back."

The scene takes place in Ellis Island at the beginning of the 20th century. The main character is Jacob who was there to take the tests to reach the USA. There was also an inspector who was very strict and authoritative. He performed the literacy test and selected the immigrants. Finally, there was Doctor Carl Travers: he was gentle and more understanding than the inspector about the situation of Jacob. His role was to perform the medical test. At the end of the document, the doctor let Jacob enter

the country. He may have understood Jacob's situation. He may have been an immigrant himself. He may have known that Jacob's life would be in danger if he was sent back to Russia."

Jacob is the main character. He immigrated from Russia to escape from the persecutions of the Jews. He used to live in a small village but now he wants to enter the US so as to have a better life.
The first inspector was very strict and authoritative. He checked if immigrants could read and write in English. He also checked whether / if immigrants were healthy or not. He was quick because he may have wanted to intimidate the immigrants. But he may have wanted to have the most important number of immmigrants pass the tests.
The first inspector may have been authoritative because he thought he couldn't help everyone. If he did help everyone, the immigrants might have taken advantage of him.

Doctor Carl Travers was, contrary to the inspector, very gentle and understanding. He may have wanted to help Jacob. He may have understood Jacob's situation. If he didn't let Jacob enter the US, Jacob might have died. 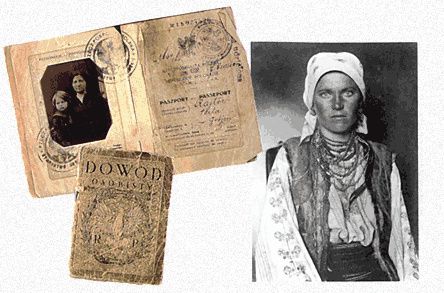 Group 1: "She may be an immigrant. She may be Polish because on her passport there are an R and a P and the eagle which I think is the symbol of Poland.
According to me, she is destitute. She is wearing an old-fashioned traditional costume.
She may have tried to escape the attacks of WWII.
She may go to the U.S. She might prepare herself to sail (to travel by boat) to the U.S."

She may come from Poland because she is wearing old-fashioned clothes, and necklaces. With her head-scarf, she looks like a pirate. It may be the traditional costume of Eastern European Countries.
Moreover/Besides, there are an R and P on the passeport.
It may mean Republic of Poland.
I disagree, her passeport isn't written in Polish alphabet.

She may have been attacked in her country. Her mother may have died. She was too young to immigrate so she may have taken her mother's identity in order to enter the US.

* WHAT IS GOING TO HAPPEN ?

She may take a boat/sail to Ellis Island.

GRAMMAR: Dont' forget ! If you have to describe a picture -- use present Be+ing to conjugate your verbs.
SPELLING: Don't forget the capital letter (majuscule) for country-related words (nouns AND adjectives).


- to be appalled of
- to be terrified of
- to be afraid of, frightened of, to be scared of
- frightening, fearful
- to fear, to dread

Published by English Prof - in Teachers' Corner
write a comment …
<< A thief in the streets of... Super Heroes and Real TV vocabulary... >>

M
Marek
07/03/2013 16:00
Her document says 'identification card' in Polish, so yes, the document has been issued by the republic of Poland. The picture is too small for me to see anything more. The picture looks to be
older than WWII-era though, I'd rather say this is around WWI, but it's just my impression. On a side note - Poland is in Central Europe.
E
English Prof
07/05/2013 07:47


Thank you Marek for your comment.
So indeed I've been right for the past 6 years or so about her identity.


However the process of letting the students imagine what they don't know for sure is the most interesting part of the job. What is most important for me is for them to speak whatever they
actually imagine and say.


If you could send me the "new" adapted sequence once done, that would be lovely.


Thanks for the compliment. I'm pleasaed I could be of some help to you.


I'd be glad if you could send me some examples of your poems when you have finished your activities so that I can see what your students have acheived.


Thank you for commenting on the blog and for sharing too.
I'll have a closer look at this site when I get back to work as I am still on vacation : )